Limnopharma awarded with the 1st prize of the AcexHealth accelerator program

Limnopharma has been awarded with the first prize (Gold prize) of € 10.000 of the AcexHealth accelerator program. AcexHealth is the first accelerator program for Health startups in Andalucía, sponsored by the Parque Tecnológico de la Salud (PTS, Graada), the Consejería de Transformación Económica, Industria, Conocimiento y Universidades from Junta de Andalucía, the University of Granada and Camara de Comercio de Granada. Together with Limnopharma, Andalusian startups Lentistem and Biomixing have been awarded with the silver and bronze prices, respectively.

The program consisted in different modules, from Market analysis and Competitive Positioning to Financing and negotiation strategy, and the companies could pick and choose the modules in which they wanted to participate. Ten companies were selected to participate in the program, that started in September and concluded last December 17th with the Investors day, where different companies presented their projects to a group of investors and venture capital firms.

Limnopharma’s team is grateful for the opportunity to participate in AcexHealth and collaborate with great mentors during the program. We are also very proud of having been awarded with the Gold prize and being recognized for our work and effort.  We´ll keep working hard to progress Limnopharma’s project until finishing clinical proof of concept for LIM21 and developing new drugs to solve the great problem that retinal degenerative pathologies represent. 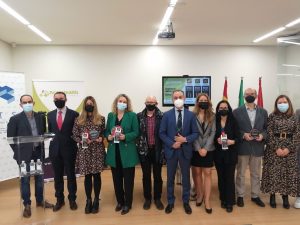